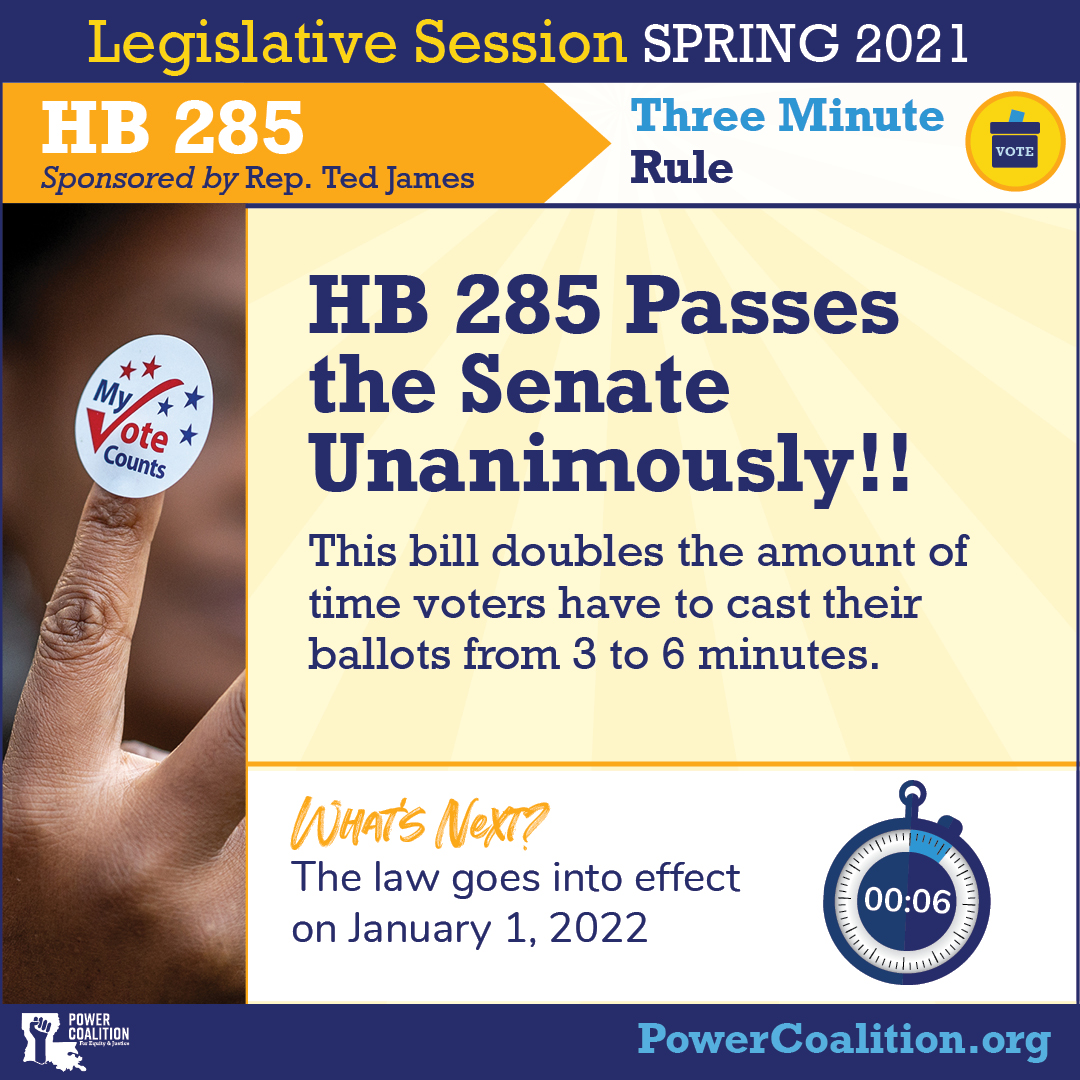 Baton Rouge, LA– HB 285 to increase the amount of time one has in the voting booth passed the Senate unanimously yesterday, clearing the path for the Governor’s desk. The bill, sponsored by Representative Ted James out of Baton Rouge, increases the time limit that people can spend in the voting booth from three minutes to six minutes for all elections.

Power Coalition for Equity and Justice, the organization that encouraged this bill and engaged community members to support the bill, says this bill is based on an issue that arose again in the 2020 election, with people being asked to leave the voting booth after 3 minutes even if they did not have time to complete their ballot. In 2020, with a ballot that included 7 Constitutional Amendments in addition to a list of seats ranging from President to School Board members, for many people three minutes was just not enough time to cast their vote.

The three minute rule was not evenly enforced with some precincts following it closely while others seemed to disregard the rule. Further, it disproportionately affects people who may need additional time casting their ballot. The list of people that did not feel 3 minutes was enough time included elderly people, people with disabilities, parents trying to vote with their children, or people who may not have been able to look up the ballot ahead of time.

“This was about ensuring that everyone has access to democracy and is able to cast their ballot confidently and without fear that they will be asked to leave the voting booth,” said Power Coalition Director of Programs Janea Jamison.

This bill puts Louisiana in line with other neighboring Deep South states for how long voters have to cast their vote. It protects the voting integrity of the overall process for all Louisiana residents who now have time to ensure their ballot is correct, completely filled out, and that they feel confident in the amount of time they have to complete the ballot.

Power Coalition for Equity and Justice and their partners activate an election day voter protection hotline so that they can respond in real time to any election day problems but also to track any issues that should lead to changes such as the 3 minute rule extension.

The bill is headed to the Governor’s desk and when signed will go into effect January 2022.